Hello Friends. Today’s topic is a quick review of some of the research that was presented at Digestive Disease Week (DDW), the BIG US based GI conference on May 21-May 24, 2016.

I spend a few days running (seriously! I put in over 14,000 steps/day) around the San Diego convention center to attend meetings on gut health. It is an exciting time in this area of research, especially as a registered dietitian, as more and more studies are pointing to the role of nutrition/diet and changes in its impact on the gut microbiome. Changes in our gut microbiome can make the difference between health and disease. 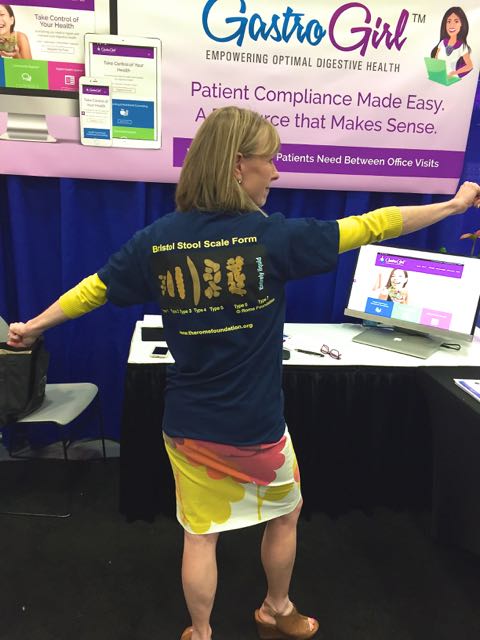 We like to have fun at DDW too! Here I am with my Bristol Stool Chart at the Gastro Girl booth, a new novel telehealth and online community that I have been working with for people that suffer with GI conditions!

The intestine is protected from gut microbes that inhabit our intestine via multiple layers of mucus structures that cover the intestinal surface. The mucus layer in essence is a safety layer, keeping microbes from invading the inner lining of epithelial cells of the intestine. Emulsifiers have been implicated in disrupting the mucus layer.

Food emulsifiers are detergent like compounds that are added to a wide variety of processed foods–and are approved as safe and may be lurking in your carefully selected and yes, even in organic foods.  But more research is linking polysorbate 80 (P-80) and carboxymethylcellulose (CMC) to changes in the gut microbiota, increasing likelihood of inflammation, intestinal permeability (leaky gut), and a reduction of mucus in the intestine. Hirotaka Furuhashi of Japan presented a paper at DDW on P-80 and carboxymethylcellulose- using small intestines with lesions from just-killed mice to demonstrate that the common food additive P-80,  increased the injured area promoting damage of the small intestine.

A group of researchers from the US at Georgia State: Benoit Chassaing, Tom Van de Wiele and Andrew Gewirtz group had previously demonstrated in their research that dietary emulsifiers (P-80 and CMC) results in alterations in the gut microbiome (increase in bioactive LPS and flagellin–bacterial components linked with inflammation)–these changes are linked with metabolic syndrome and colitis. Intake of both P-80 and CMC increased potential pro-inflammatory effects. P-80 alters the composition of the microbiota, favoring species that express more flagellin, while CMC,increases motility genes. More on this topic here.

Could  the wide use of food emulsifiers be a contributor to the rise of inflammatory bowel disease? Perhaps. And this is just one reason, that I encourage that the majority of your food choices be from whole foods vs. products.

One of the most frustrating issues for me in the treatment of SIBO has been a lack of standardization for diagnostic measures of SIBO as well lack of research on dietary interventions for people that suffer with this condition.  SIBO is a condition in which an abundance of microbes invade the small intestine. Typically, the small bowel should not house that many resident microbes.

At DDW, Ali Rezaie, MD from Cedars Sinai presented Hydrogen and Methane Based Breath Tests in GI disorders: Report of the North American Consensus Meeting.  A small group of physicians from the US, Mexico, and Canada met to strategize and attempt to provides some standardization for breath testing for SIBO and carbohydrate malabsorption.  Some general agreements regarding testing and results of breath testing were presented at DDW:

Satish Rao’s group from Augusta, Georgia presented a study looking at small bowel transit and found that those with SIBO has a delay in small bowel movement. Treating the movement by use of prokinetic medications such as low dose erythromycin appears to be one treatment modality to address this issue.

Another study presented at the conference on breath tests for SIBO, revealed that about 1/3 of 1,000 subjects studies with persistent GI symptoms had a positive breath test for SIBO or carbohydrate intolerance. Should most patients with IBS be tested for SIBO?  This remains an unanswered question. If you asked me, I would say, if the patient experiences bloating or post meal fullness, absolutely, YES!

Satish Rao’s group also reported on the relationship of microbial end products including d-lactic acid that may play a role in brain fog in a subset of patients with dysbiosis. A paper back in 2009 reported a connection between chronic fatigue and d-lactic acid production, click here.  D. lactic acidosis may present as: headaches, weakness, cognitive impairment, fatigue, pain and severe lethargy.

Shi-Yi Zhou, also at University of Michigan reported on his interesting study evaluating the impact of the low FODMAP diet and visceral hypersensitivity. This study reveals a change in lipopolysaccharide (LPS),  the outer layer of the cell wall of gram negative bacteria and is also an endotoxin. LPS is associated with inflammation, diabetes and obesity.  In Dr. Zhou’s study, he found that patients with IBS-D had elevated levels of LPS which induced visceral hypersensitivity (a greater sensation of pain) and impairment of the mucus layer in the intestine. The low FODMAP diet normalized LPS levels and restores the mucosal layer and reduced the sensitivity of the intestine, collectively leading to symptom improvement.

I was also happy to see topics around bile acid diarrhea (BAD)–as I feel this is a problem for some of my clients with IBS-D. I did a post about BAD a while back, check it out here.

There was also some dialogue about evaluating digestive enzyme levels via intestinal biopsy.  I have been asking for this to be done for YEARS!! The testing requires dry ice….and to be shipped to a lab that can test for the presence of digestive enzymes. NOT rocket science! These tests are often checked in children, but not in the adult population.  I do believe in the setting of inflammation in the small intestine, there may be a reduction in digestive enzyme production. Hopefully, testing will become more routine in a subset of the adults who’s symptoms are suggestive of carbohydrate malabsorption!

Of course, this is just a snap shot of what I learned over the conference! DDW is a great conference to learn from some of the best researchers in the world. Maybe I will see you there next year in Chicago?