Hello. I thought it would be nice to talk about bile acid today, are you with me? 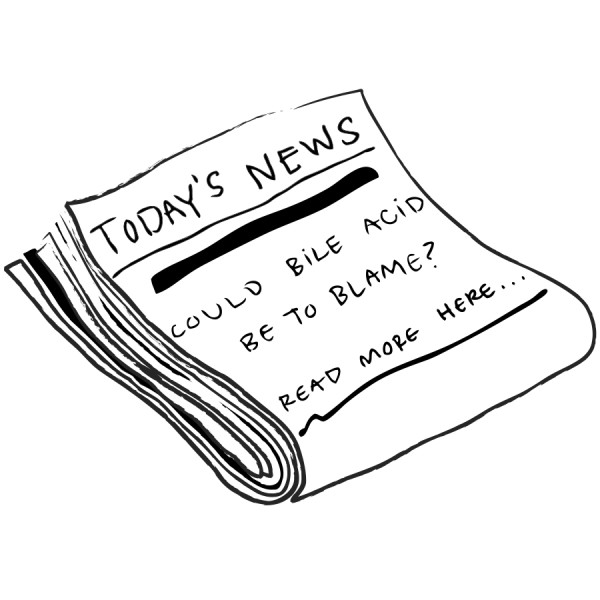 Bile acid diarrhea is also known as BAD. Perfect acronym, right? You might have BAD if you have been experiencing IBS-D like symptoms: chronic diarrhea, urgency, incontinence, bloating and discomfort. Unfortunately, bile acid diarrhea or malabsorption of bile is an under recognized problem–often not on the radar of many gastroenterologists or primary care doctors.

I have been talking about bile acid malabsorption and diarrhea with some top GI docs around the globe. Trying to learn from the best so I can provide new and updated findings on this topic. Perhaps, for some of you, this post may provide valuable information as you attempt to connect the dots between your symptoms and potential causes. Because GI problems, truly, can be one big puzzle with many overlapping puzzle pieces.

Bile acids play a key role in absorption of fat in the small intestine. They are released from the gallbladder into the bile duct when you start eating a meal. A good analogy: bile acids act like Dawn dishwashing liquid–help breaking down fat into small globules, allowing the fat to be digested!

Normally, about 95% of the conjugated bile salts are reabsorbed in the terminal ileum and returned to the liver via the portal venous system, a recirculation process known as enterohepatic circulation; only a small proportion (3-5%) are excreted into the stool. When bile acids are NOT re-circulated, they arrive in the colon. Bile acid in the colon increases the motility of the colon and draws water in contributing to diarrhea, bloating and urgency.

Have I lost you yet? I hope not!

Bile acid diarrhea can be misdiagnosed as IBS-D.  There are several reasons how and why bile acids may wreak havoc.

I asked Dr. Julian Walters, professor of gastroenterology at Imperial College London to share his expertise on bile acid diarrhea, “Bile acid diarrhea is most common in its idiopathic (primary form) where there has been no previous surgery and no obvious intestinal or other disease.  This is usually then diagnosed as chronic functional diarrhea or irritable bowel syndrome.  Recent work suggests that there may be excess formation in the liver of bile acids and this can be more than can be reabsorbed fully.  Liver synthesis of bile acids is controlled by a newly identified hormone,  FGF19 (fibroblast growth factor 19) and patients with bile acid diarrhea have lower levels of this hormone which can lead to making excess bile acids. Primary bile acid diarrhea accounts for a third of patients with diarrhea-predominant IBS.  This will be about 1% of the overall population.  Diagnosis can be a problem in the US.  People get loose, watery bowel movements, an increased frequency (up to 10 times/day), an urgent need to go, and sometimes fecal incontinence. This leads to fears which affect social life, work opportunities and so on. Current treatments rely on binding excess bile acids in the bowel with drugs such as Cholestyramine. Research is looking at new ways to affect the FGF19-bile acid synthesis pathway.”

Dr. Michael Camilleri, a world renown researcher and gastroenterologist at Mayo Clinic in Rochester, Minnesota shares his update on testing for bile acid diarrhea, “Mayo Clinic has made available through Mayo Medical Labs a test to diagnose bile acid diarrhea/malabsorption. This total fecal bile acid excretion in 48 hours can be performed on the same collection for fecal fat estimation.  Thus, when the doctor needs to investigate the cause of chronic diarrhea, one 48 hour collection performed while ingesting 100 gram fat diet will provide both estimates of fat and bile acid malabsorption. In the next year, it is anticipated that Mayo Medical Labs will launch a fasting blood test to screen for bile acid diarrhea based on the rate of synthesis of bile acids in the liver (serum C4). There is accumulated evidence that 25-40% of patients with chronic functional diarrhea or IBS with predominant diarrhea have bile acid malabsorption.”

I look forward to better testing than collecting poop for 48 hrs…which, really doesn’t sound like fun!

Dr. Kelly provides some tips, “Colestipol is a large pill, so it may not be the best option if you have trouble swallowing big pills.  Start with one pill. Some people need up to three per day and some need it only 2-3 times per week.” Cholestyramine (Questran) is a gritty powder that is taken daily. Dosing varies per person 1/2 a packet might work or some individuals use up to 3-4 packets per day!  Start slow and titrate up!

A great review article on bile acid diarrhea can be found here! And another article by Dr. Walters here! These are medical/research articles though…not designed for the consumer but still has valuable information.

Of course, not all diarrhea is bile acid induced!

Osmotic diarrhea is associated with FODMAP intake.  FODMAPs are very small carbohydrates that are commonly malabsorbed. The small size of FODMAPs contributes to their ability to pull water into the intestine.  Secretory diarrhea can result from bacterial toxins, reduced absorptive surface area caused by disease (celiac disease) or intestinal resection,  laxatives over-use, drug side effects and medical disorders that reduce intestinal function.

If unrelenting diarrhea is stopping you in your tracks, discuss the possibility of BAD with your gastroenterologist!