About a week and a half ago, I had the pleasure of attending DDW:Digestive Disease Week 2015, an annual US conference devoted to the GI tract. 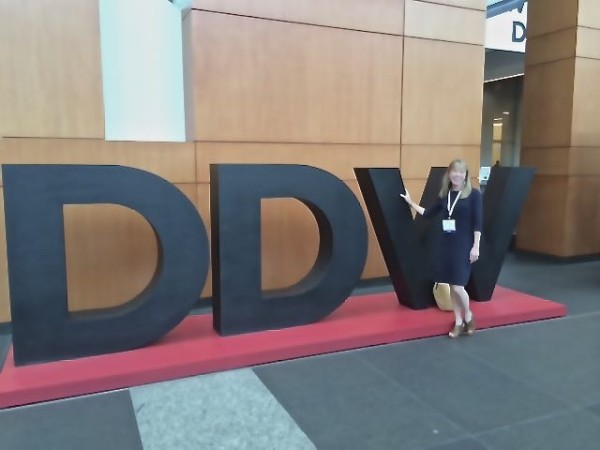 To be completely honest, to me, being at DDW felt like being at Disney World. So much to see and do, and yet, too little time to take it ALL in. So many great talks occurred at the same time! I really wanted to attend ALL of them.

DDW is a BIG GI event…not only for the US gastroenterologists, dietitians, nurses and other health professionals interested in gastroenterology, but it attracts worldwide attention and attendance.

If you are a health professional interested in digestive health, I highly recommend you attend this event! Next year, DDW will take place in the beautiful city of San Diego!

In addition to the talks, the expo and poster sessions were another big area of learning opportunities. The poster sessions were FULL of numerous abstracts, each providing a brief synopsis of a research project…I have NO idea how many posters were present at DDW–but let’s just say, too many to read them all!  Typically, one of the researchers involved in the study was available to review their research with you. It is such a great opportunity to talk to the researchers directly and get their thoughts of the data they collected during their research. The benefit of going to these conferences is that you have access to research much sooner than most people will see it, as it takes quite some time to get research published in a peer reviewed journal.  The expo was full of manufacturers of scoping devices,medications, vitamins, supplements and probiotics…and much more.

Here are a few topics presented at DDW that I found interesting:

Biomarker for IBS-D? New research suggests the pathophysiology of IBS-D may be acquired by a bout of acute gastroenteritis and subsequent alteration in GI function. Research has led to uncovering 2 potential biomarkers for IBS-D:

You can find more about this study by Cedar Sinai and Beth Israel Deaconess Medical Center researchers  here.  Measurements of the anti-CdtB and anti-vinculin antibodies may help identify patients with IBS-D with a simple blood test. This is important news in the IBS-D world because if a simple blood test can provide answers regarding the cause of your symptoms, you may be able to skip more invasive tests such as repeated colonoscopies.

Probiotics contaminated with gluten? One of the BIG news items from DDW was from Peter Green’s group at Columbia in NYC. Researchers at Columbia evaluated 22 commonly purchased probiotics, revealing that 12 of the 22 had gluten contamination.  Four of the brands contained greater than 20 PPM (above the acceptable limit per FDA for a product to be considered gluten free) an unacceptable amount, especially for those with celiac disease, an immune mediated condition in which gluten is toxic to the intestine. Here is a recap of this study. Tricia Thompson, owner and founder of Gluten Free Watchdog will be testing probiotics for gluten.  Gluten Free Watchdog provides a great service to those with gluten intolerance, which serves to independently test products to assess for gluten contamination. In order, to test numerous probiotics, Gluten Free Watchdog will need donations to fund the extensive research needed to test a variety of products. Tricia Thompson, MS, RD, gluten expert and founder of Gluten Free Watchdog, notes, “Probiotics are supplements and are regulated by the FDA under the category of “food.” Unlike medications, supplement manufacturers do not need to prove through scientific study that their products are safe and that they work. On the positive side, supplements labeled gluten-free must comply with the FDA’s gluten-free rule. If a product, including a probiotic is not in compliance it should be reported to the FDA.”  If you are willing to donate to help fund further probiotic testing via Gluten Free Watchdog, please contact Gluten Free Watchdog at: info@glutenfreewatchdog.org

PLEASE note, the results of this probiotic testing will only be available to those who subscribe to Gluten Free Watchdog which is $4.99/month.  If you require a gluten free diet or educate patients on gluten free living, I think this subscription is well worth the money.

Low Vitamin D linked with inflammatory bowel disease? Rush University researchers presented data on Vitamin D and Vitamin D receptors and a potential connection with inflammatory bowel disease, infection risk and cancer. Their research suggests that if the vitamin D receptor is not functioning properly this can impact the gut microbial community and that identifying this defect and restoring its function may have future implications in maintaining a healthier balance of bacteria in the gut.

Fecal incontinence (FI) is more common than you might think, is not a consequence of aging, AND there are effective treatments!  UNC researchers: Whitehead, Heymen, and Palsson reveal that FI impacts about 9% of US adults and embarrassment is the primary reason that patients don’t discuss this issue with their doctor.  There is a misconception that FI is a natural part of aging and yet, there are many effective treatments!  {low FODMAP diet seems to help patients as just one option! An area of ongoing study underway at U. Michigan! }

Dr. Raja at John Hopkins discusses the notion of ‘shy bowel disorder’ an under-recognized form of functional gut disorder.  When using a public restroom is difficult and you avoid at all costs…consider biofeedback and pelvic floor physical therapy.  For what it is worth–there is also ‘shy bladder disorder’!

Italian researchers presented their findings that there was a high prevalence of lactose malabsorption found in patients affected by gallstones, suggesting that an alteration of bile composition could destroy or alter lactase enzyme in the intestine, the enzyme that allows our body to digest lactose. Interestingly, the researchers also found high prevalence of methanogenic flora in the patients they studied, suggesting a relationship between methane producing microbes and the formation of gallbladder stones. Methane producing microbes are as many of you know, associated with constipation or a sluggish intestine.

Researchers from University of Nottingham presented their results of their study using MRI (magnetic resonance imaging) and hydrogen breath testing looking at the  impact of fructose and inulin on symptoms in 29 patients with IBS. As you know, FODMAPs have been shown in research to pull water into the intestine (osmotic effect) and are rapidly fermentable, causing a rise in gas.  Individuals with IBS have been shown to be more sensitive to the aftermath of FODMAP ingestion.  This study showed that  Inulin induced symptoms in more IBS patients than the well absorbed sugar, glucose.  Symptoms from inulin correlated with the time of the peak in gas production in the large intestine. The peak in gas production from inulin occurred at 240 minutes post consumption. Fructose, had the greatest impact in pulling in water into the small intestine and symptoms peaked at about 50 minutes after fructose ingestion.  The same study was done with healthy controls that showed that fructose increased water content and inulin increased colonic gas, as well, however, the healthy controls did not have any GI symptoms. This study can be assessed here.

Lovastatin lactone, a medication used to lower cholesterol, was shown by Cedar Sinai researchers to reduced methane production in a rat study.  Perhaps lovastatin will be used as an adjunctive medication to reduce methane production in constipation predominant IBS patients, if methane microbes are part of the picture??  Further study is needed to elucidate the potential role in humans.

I was fortunate to meet, Julian Walters, the researcher and gastroenterologist I had interviewed about bile acid induced diarrhea for my post on this subject, found here.

And that is just a small taste of all that I learned and was presented at this conference! Now let’s move onto a couple new products!

A new targeted delivery of peppermint oil to the small intestine improves symptoms associated with IBS.  Peppermint oil has numerous studies to support its use in IBS. It functions in relieving symptoms in many ways, as an anti-spasmodic, anti-inflammatory, & anti-microbial agent.  IBgard is a medical food with FDA approval, it is a triple-coated controlled release product that allows release in the small intestine.

The new biomarker blood test for IBS-D available from Commonwealth labs based on research from Mark Pimentel’s group at Cedar Sinai and Beth Israel Deaconess in Boston.

I will stop here! Congrats if you made it this far!

And a couple of announcements:  If you are a dietitian or health professional, I will be joining Monash University at an upcoming scientific meeting in Prato, Italy in November 2015.  Registration is open for this event, is limited to 120 health professionals and should be a great learning opportunity! Click here to learn more.  And, hey, who needs an excuse to travel to Italy?

If you are a FODMAPer and live in the Boston area, my friends at Weigh to Go, will be providing a low FODMAP cooking class on June 12, 2015. Click here to register!