Diet and Microbiota in Health and Disease Symposium

This year, the title was Diet and Microbiota in Health and Disease. 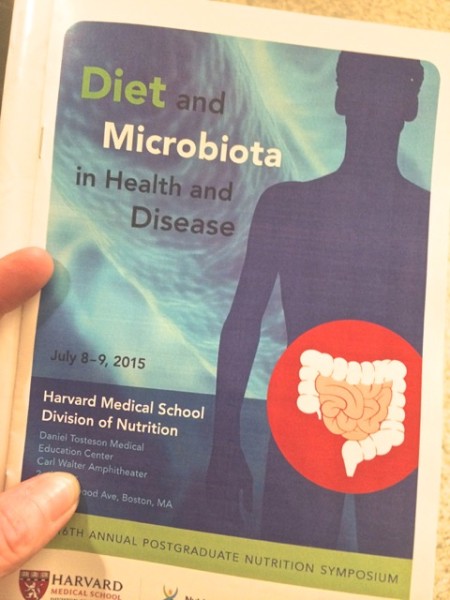 To me, this area of research is utterly fascinating. Certainly for those of us with GI issues, understanding the role of gut microbes in relation to symptoms and overall health is paramount. But our gut microbes play a big role for all human beings, in health and in the advent of disease.

I have been following this research as closely as possible for the past 10 years…and what I can tell you is the more I learn about gut microbes, the more I realize the little we know about the magnitude of their role in our body.

The symposium covered some interesting topics such as: the role of breast milk in early intestinal colonization, role of food additives, particularly use of emulsifiers and their impact on the gut environment, high fiber diets, microbiota and allergic inflammation in the lungs, gut microbes in relationship to inflammatory bowel disease and onset of celiac disease, how the gut microbes impact circadian rhythm, and changes in the gut microbiome in obesity. Much of what was reviewed was looking at animal studies and is not ready for prime time in clinical practice with real people. This research is quite complicated and although we have expanded our knowledge significantly in the last 10 years, we have a very long way to go. Many of the studies evaluated colonic or fecal microbe levels rather than culture small bowel bacteria or bacteria that resides on the bowel wall. These microbes likely are even more important to our health but are a bit harder to access. As much as I would love to review everything, I will review only some of the highlights:

Emulsifiers commonly used in food products (to prevent the food from rotting!), Polysorbate 80 and Carboxymethycellulose are linked with metabolic syndrome, inflammatory bowel disease and small intestinal bacterial overgrowth.  This presentation was provided by Andrew Gewirtz, PhD from Georgia State University.  Although these food additives are generally recognized as safe (GRAS) by the FDA, they may induce changes in the gut environment, changing the lining of the GI tract, allowing a new niche for bacteria to ‘hang out’ and potentially cause damage and degradation of the protective mucus barrier.

The digestive tract is coated by a layer of mucus.  Mucus consists of proteins called mucins that functions to keep the lining lubricated and protected. Typically, the mucin is produced by goblet cells in our intestinal tract on a regular basis unless, this goblet cell function is disrupted by microbes and their toxins. This disruption can lead to degradation of the mucus layer.

Here is a great recap of Dr. Gerwirtz’s work. And here is a mice study linking emulsifier use to bacterial overgrowth. Please note: Some links will be the abstract only as I do not have access to the entire article.

Another interesting talk was presented by Gary Huffnagle, PhD from University of Michigan.  His topic was the impact on microbiota, diet and allergic inflammation in the airways.  The lung was believed to be a microbe free organ for years but we now know that there are microbes that reside there normally. The bacteria in your mouth and nose is different than the bacteria that exist in the lungs. The lung’s lipid layer is a less favorable environment for bacteria to grow which differs greatly from the mucus lining of the GI tract. When inflamed, the lung environment changes and bacteria can find a niche to grow.  Dr. Huffnagle reported on this study showing  that dietary fermentable fiber content changed the composition of the gut and lung microbiota, in particular by altering the ratio of Firmicutes to Bacteroidetes. The gut microbiota metabolized the fiber, consequently increasing the concentration of circulating short-chain fatty acids (SCFAs). Mice fed a high-fiber diet had higher levels of SCFAs and were protected against allergic inflammation in the lung, whereas a low-fiber diet decreased levels of SCFAs and increased allergic airway disease.

Eric Martens, PhD, a researcher from University of Michigan, spoke about the role of polysaccharides and microbiota.  Remember FODMAPs are short chain carbohydrates while polysaccharides are L-O-N-G chain carbs. Dr. Marten spoke about how our gut bacteria have more carbohydrate digesting enzymes than we do.  There is some evidence that a diet low in fiber may contribute to the erosion of the mucus layer, which as I mentioned previously, normally provides a healthy barrier in our intestine. Depending on your genes and risk factors, some bacteria that help our body digest some starch and pectin, in susceptible individuals, can also induce colitis or inflammation in the large intestine. An important point: the onset of disease often involve your genetic make-up, changes in the environment (use of antibiotics, drugs, diet, etc) and gut microbes.  Genetic susceptibility for some health conditions often needs to be present for the disease state to emerge.

Lindsey Albenberg, DO from The Children’s Hospital in Philadelphia, spoke about diet and the intestinal microbiome and implications of disease, noting that gut microbe alterations have been linked with many diseases including: diabetes, heart disease, asthma, colon cancer and inflammatory bowel disease.  Dr. Albenberg noted that the less microbiome richness–meaning a reduced variety of microbes and their genes present– is associated with the diseased state. The Westernized diet is associated with a decline in microbiome richness.  Dr. Albenberg reviewed a study on vegans and omnivores (animal and plant eaters) revealed the 2 diets led to different composition of gut microbes, though the short chain fatty acids production, a  by product of fermentation, –surprisingly–remained similar. Gut microbial metabolites differed on the different diets. This brings up an important point, the presence of gut bacteria, amounts and types, is important but so is the type and amount of metabolites they produce. Some metabolites are toxic.

High fat diets–can alter bile composition and therefore,  can encourage the growth of pro-inflammatory gut microbes.  In one study, a diet rich in milk-derived saturated fat led to a rise in taurocholic acid which, in turn, stimulated the growth of certain gut bacteria. In genetically susceptible mice, one of these microbial species (Bilophila wadsworthia) triggered intestinal inflammation and colitis.

I had 4 not surprising but major take-a-ways from this conference:

Gut microbes and their impact on health is a global topic. Recently, Jane Muir, a dietitian and FODMAP researcher at Monash University was featured on the news in Australia with other scientist discussing this very topic.  Here is a clip from that segment.

Humans never truly dine alone–our diet is intimately linked with the functioning of the trillions of microbes that inhabit our gastrointestinal tract, the gut microbiota. ~Peter Turnbaugh

27 replies on “Diet and Microbiota in Health and Disease Symposium“