The recipe of the day…Ta Dah!…Stuff a Spud! This little recipe is so easy and versatile as you can really top a spud with any of your favorite veggies, cheeses, herbs and even meats.  We enjoyed our potatoes with a side of delicious marinated lean steak. In a previous post, I did a Breakfast Potato, check that recipe here! 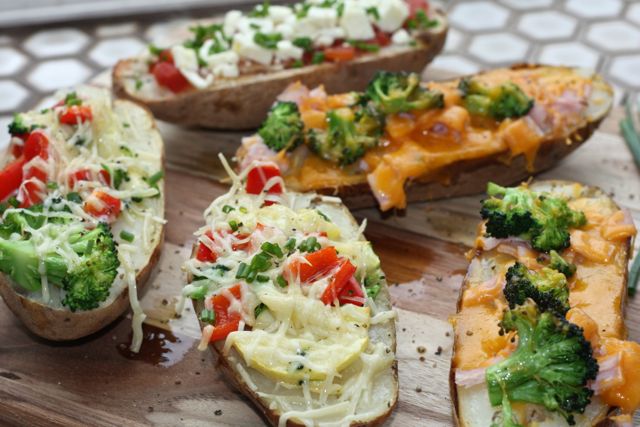 Thanks for being patient while I have been away from the blog for the past 2 weeks. I am back from a wonderful vacation to France and Belgium.  Paris is one city I just can’t get enough of….really amazing! Here’s little taste of the Eiffel Tower for you!

I visited with one of the Monash Uni researchers, in Leuven, Belgium where she is currently doing research. Leuven is really a quaint city!    We had a wonderful seafood dinner and a stroll around the town.  I admittedly probably drove her a bit crazy asking a million questions relating to digestive health, FODMAPs and the direction of new research.  Hope she didn’t mind too much! 🙂

While in France, we took a side trip to Lyon.  We visited with a two researchers at the Institut Paul Bocuse.  We enjoyed an amazing lunch cooked up by the culinary students and learned about the research being done there.  The key take away for me is that the role of pleasure, enjoyment, and appeal of food is SO important along with the social aspects of eating at the Institut Paul Bocuse.  Food is not a means to an end–but sustenance that should be truly enjoyed–ideally in a pleasant social setting.  I feel the US has failed this vital message and we as a society are often grabbing food and gulping it down.  We are focusing on calories and fat grams instead of savoring and enjoying beautiful nourishing foods made with care and attention.  I know there are some of us that appreciate food and all the pleasures that come with eating a tasty meal…but in general, I believe, we need to have a different perspective….and move in a healthier direction in the US focused more on slowing down and enjoying every bite….Just my humble opinion. 😉

Of course, while I was away, there was quite a bit of news about FODMAPs and their potential role in gluten sensitivity.   NPR wrote a piece, and so did the New Yorker and Forbes too!.  Seems that the media is finally taking some interest in fermentable carbs and their role in digestive distress.  Can I say, “Amen”?!!  It amazes me how s-l-o-w  the word is getting out about FODMAPs…though it certainly is gaining some momentum..there is more work to be done…much more research and much more education.  Personally, I do believe that gluten sensitivity (outside of celiac disease, where we know gluten is toxic) exists in a subset of people….but likely far less than those troubled by FODMAPs.

So…I am back in the kitchen.  This week, I enjoyed  baking up some big ‘ol Idaho potatoes and stuffing them to the gills with some yummy low FODMAP goodies: diced tomatoes, feta and chives; summer squash, broccoli and red bell pepper and parmesan and broccoli, ham and cheddar.  (Don’t worry: I kept the broccoli under the 1/2 cup limit!) 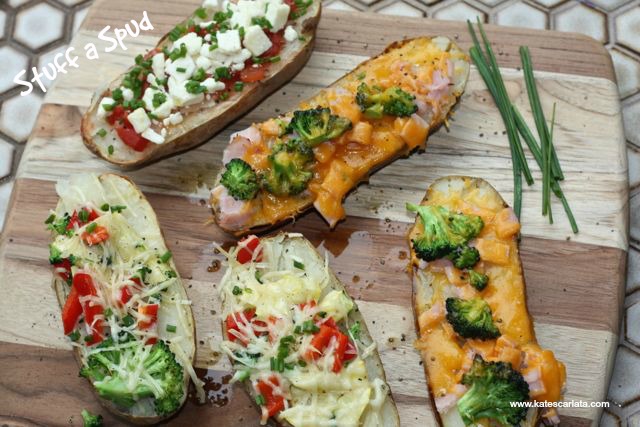 I made enough so that we had them as a side dish two nights in a row! Super yummy!

Here’s an outline to follow from if you want to stuff a spud too!

Oh….and if you might be interested….I posted a bunch of pictures from my trip on Instagram–so feel free to check them out @katescarlata.

And if you made it this far…congrats! Leave your name in my comment section and I will randomly pick a winner to receive my 21 Day Tummy Cookbook! This cookbook will officially be released later this year but is available 21DayTummy.com The recipe book provides information about the low FODMAP diet and includes all low FODMAP tasty and nourishing recipes.  Hope you win!