For IBS awareness month and as part of the #IBelieveinyourStory campaign, I will be periodically sharing stories of courage and inspiration. IBS can impact anyone at any age. It is more prevalent in women and impacts our little kids too. Today’s IBS story is from one of my favorite colleagues, Niki Strealy, AKA, The Diarrhea Dietitian. Niki is one of the most authentic people I know…and I absolutely love that about her. She is a smart dietitian with a specialty in digestive health. She practices in the Portland, Oregon area. Check out her site here.

Here is Niki’s digestive health story and her priceless picture that she shared with her followers via Facebook:

“April is Irritable Bowel Syndrome (IBS) Awareness Month. I’m supporting Kate Scarlata’s #IBelieveinyourStory campaign to increase IBS awareness, fund research, and improve patient care. Many of you have already heard my story, but for those who haven’t, here it is…

You can appreciate the mid-80’s feathered bangs and purple cable knit sweater, but can you guess how old I am in this picture? 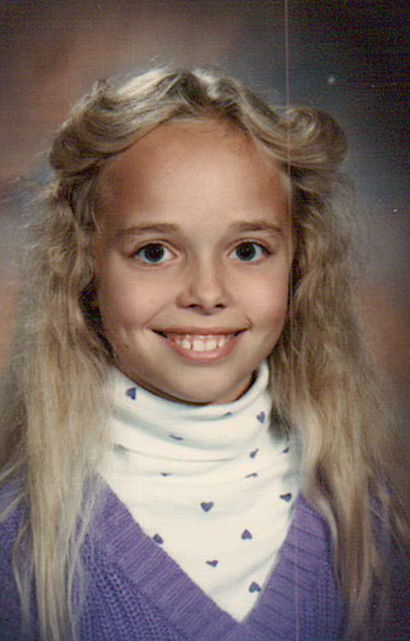 This is me in 7th grade! I was a gymnast at the time, small for my age, and clearly a late bloomer. Just a month before this picture was taken I went to my pediatrician for my sports physical.

During the physical, my mom and I mentioned I was having a lot of diarrhea. (Side note: My mom’s sister had ulcerative colitis, which tends to run in families.) He must have taken my symptoms seriously, because he referred me to a gastroenterologist who then ordered stool studies and a barium enema.  The stool studies involved pooping into a cup for three days in a row, then delivering my sample to the doctor’s office.

The barium enema procedure, which (thankfully) isn’t used very often anymore, was a traumatic experience etched in my thirteen-year-old memory. For two days before the test, I had to clean out my digestive tract, similar to a colonoscopy prep. Only back then, they didn’t have GoLytely or MiraLax. I had to drink castor oil mixed with orange juice. (I didn’t drink orange juice again for ten years!) I also had to follow a specific diet and give myself a fleet enema.

The barium enema test itself involved laying on a tilted x-ray table while someone inserted what felt like a ginormous rectal tube. For some reason there were about 15 people in the room to “help” or observe my procedure. As you can imagine, I was mortified– laying there awake, naked from the waist down, a rectal tube in place, and 15 people watching.

They alternated squirting the barium contrast and air into via the rectal tube into my colon while having me move into different positions while they took a series of  about 50 x-rays. At one point, the tube slipped out and the nurse patted me on the shoulder and said, “Don’t worry honey, we won’t have to put that back in.” My relief was short-lived. Someone returned a few minutes later and said, “Sorry, but we have to put the tube back in and get more x-rays.” I was so thankful when they finally had enough x-rays to get an accurate result and the test was over.

And, if that memory wasn’t enough, I had rock-hard white poop for the next 3 days, as the barium turned into concrete before it passed. I happened to be camping with my friend’s family that weekend, and we were using outdoor vaulted pit toilets, which made it interesting.

Needless to say, the results of the stool studies and barium enema were negative, which meant I did NOT have ulcerative colitis. Yay!

But the gastroenterologist didn’t stop there. I also needed to be checked for Crohn’s disease, which, like ulcerative colitis, is in a family called Inflammatory Bowel Disease. This test was called a small bowel follow through (SBFT). Again, due to advancements in medical technology and imaging, this test is now used infrequently. In this test, I drank two cups of 48 oz of chalky thick contrast (my good friend barium again). I remember gagging and crying as they made me drink more than I typically drank in an entire day in just a few minutes. Then every 30 minutes they would take an x-ray to monitor the contrast was traveling through my stomach and small intestine.

Several days later I received more good news… I didn’t have Crohn’s disease either. Yay! But that didn’t answer why had so much diarrhea. There weren’t any more tests they could do, so I was one of the thousands (maybe millions) of people given what they called a “diagnosis of exclusion”… irritable bowel syndrome, aka IBS. We now know that IBS affects 25 to 45 million Americans, or 1 in 7 people. And 2 of of 3 IBS sufferers are female!

In the next few years I had more stool studies and a flexible sigmoidoscopy, similar to a colonoscopy only I was awake during the procedure. It was very painful and a part of my childhood memories. The tests were always negative, which was good. But there was no clear reason for my symptoms.

When I was about 16, I connected my symptoms with eating dairy, especially milk, ice cream, and certain cheeses. I avoided dairy over the next 5 years until they came out with Lactaid tablets. When Lactaid tablets were first available, they were a pretty low dose. I didn’t mind– when I ate a piece of pizza I knew I could take seven Lactaid tablets and not have diarrhea! About this same time, loperamide (Imodium) was available over-the-counter. It was effective at controlling my diarrhea if I ate too much dairy. (So while I was treating the symptoms, I wasn’t treating the root of the the problem.)

As the years went on, my IBS didn’t go away, I just became better at managing it through diet and stress management. My fascination with digestive health eventually led me to a career as a dietitian.

The next part of the story is a little crazy, so bear with me. During my mid-20’s, I developed plantar fasciitis in my feet which prevented me from doing two of my favorite things: running and playing soccer. I tried every treatment available at the time, including physical therapy, ice, massage, stretching, ibuprofen, special shoes, iontophoresis, orthotics, and rest.

I also worked at the hospital on my feet all day; by this time the plantar fasciitis was affecting my ability to walk at work. I had recently married and my new hubby encouraged me to try natural medicine. At the Northwest College of Natural Medicine, I met with the doctors and explained my story. They prescribed strange treatments like spreading castor oil on my feet and wearing wet socks to bed. They also said they thought I had “too much yeast in my system.” Looooong story short, in addition to foot treatments, the naturopath prescribed some powerful herbal capsules called “candimycin” and a dairy-free diet for 6 weeks. After the 6-week treatment was complete, I was amazed to discover although I still had plantar fasciitis, the treatment had cured my lactose intolerance! (In retrospect, I wonder if I actually had small intestinal bacterial overgrowth– SIBO. The prevalence of SIBO in IBS ranges from 30-85%.)

Flash forward eleven years, to 2009. I learned about the Low FODMAP diet from Patsy Catsos and began using teaching it to my IBS patients. It was revolutionary! I was able to help even more people suffering from IBS, including myself. Balancing FODMAP carbs during the day kept my symptoms in check. Until last year, when I just couldn’t quite get symptom relief from diet alone. After blood testing and an endoscopy, I was diagnosed with celiac disease.

Now I have both IBS and celiac disease. Preparing healthy food for myself and my family is still a huge challenge. But I have hope and confidence that one day, science will unravel the mystery of IBS, and we will have established standards of care and treatment for IBS, SIBO, celiac disease, and other conditions. Maybe then we will be able to identify a person’s gut problems and have a precise treatment regimen created just for them… using a variety of tools, including a specific diet, stress management, genetic testing, herbal and/or prescription antimicrobials, probiotics, and possibly fecal microbiota transplants.

That’s my story, for now. There will be more to tell. I am thankful for:

Thanks Niki for sharing your digestive health story. We all do learn from each other and together we can make a difference!!

We do have very passionate researchers that want to learn answers…but that research requires funding and there is very little funding for IBS research. 🙁 If everyone that is reading this kicked in just $5 we would make a HUGE contribution and possibly change the landscape of IBS treatments. To donate, click here.

Care to share your digestive health story? Feel free to leave a comment in this post or email me and my team at: Inquiries@katescarlata.com.  We are all in this together.

5 replies on “The Diarrhea Dietitian’s Story“